Home Blog When God does the Inexplicable

When God does the Inexplicable

When God does the inexplicable.

Instead of baseball team practice, more dads played catch in the backyard with their sons. Rather than going to school as normal, many teachers sat at tables in their kitchens with laptops open trying to engage students who would rather be playing a video game. Instead of attempting to get each family member to their evening event or meeting, families tried to remember how to cook. Many extended families were separated by miles and travel restrictions instead of being together during a crisis. Instead of visiting in nursing home rooms with aging parents, adult children gathered around windows to wave and encourage best they could. Our normal expectations of getting over the flu in a few days were demolished when the illness sapped strength and stamina for an entire month, sometimes leading to a lonely extended hospital stay, or even death. Some families found rest and renewal, while others faced unexpected depression or anger.

Normal no longer existed. Some good changes, some horrible changes.

Amidst all of that change, the weather followed suit. Four days of below freezing weather came in mid-April. We woke to sheets of ice on the flower beds. My hyacinths froze in place. 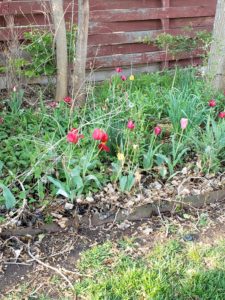 Of course they did.

But in the backyard, my tulips continued to bloom.

If I hadn’t seen it with my own eyes, I wouldn’t have believed it. The first day I didn’t think anything of it. I figured they were frozen in place. But when the temperature returned to normal during the day, and they were still standing, I thought I’d go investigate. I touched them. They were soft and delicate. When the second round of freezing nights came, I thought sure they were gone. But no, instead of freezing, they still stood, quietly blooming. 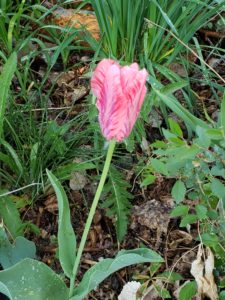 When a bud opened to reveal a new tulip, I couldn’t believe my eyes.  God did the inexplicable.

Because He wanted to remind me that He can do anything.

Whatever you are facing, don’t lose hope. God is still in control. He loves you, and He cares what is happening to you. His love is inexplicable. Don’t stop praying. Don’t stop believing. He will make all things beautiful, in His time.

Of course it reminded me of a song. In His Time by Maranatha.  I hope you will listen to it and ponder God’s inexplicable love for you.

Thank you for sharing the insights our Lord gives you.

Thank you Lora! Thanks be to our inexplicable God!!

Lora you have such a gift! You really know how to convey a message. If we take the time to look around, God’s blessings are everywhere.