This morning I put on my favorite soft, worn-out jeans and curled up in my study chair. I looked intently at the empty chair across the room. It was time to have a long talk with my Lord, and I knew it. Emptiness had been edging into my heart for quite some time.

I talked awhile, baring my heart to the One who understands me better than I know myself. His presence comforted me, and He listened patiently to my confession. Then He said, “Go outside and work on the grapevine.” I hesitated. I wanted more quiet time with Him, to hear His thoughts. When I heard Him say, “Now” I finally got up and went outside.

Grapevine is my nemesis. It’s invasive. It twists itself among my roses and lilacs and climbs my trees. I’ve known for quite some time that I needed to deal with it before it kills something beautiful.

I started with the roses. As I pushed my way between the roses and the fence, I realized I couldn’t reach the roots of the grapevine until I tended the roses. The rose thorns bit at my clothes and hair as I cleared a path to the base of the roses. There I saw a problem I hadn’t even noticed. The roses were full of dead wood. In fact, the new growth was laying on top of a large layer of dead branches. It looked like if I trimmed out the dead wood, the new, long, stems would just fall to the ground.

Sighing, I decided to try to take at least part of the dead branches out.

One by one I cut and pulled. 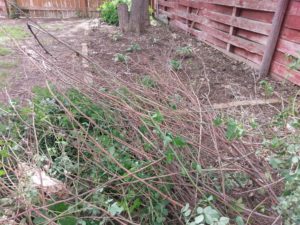 One by one, the top branches stood up. The dead ones had been holding them down! 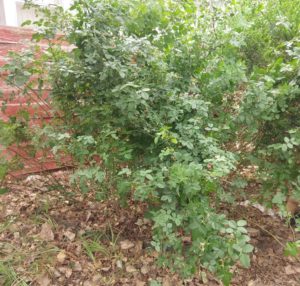 With the branches standing up and the base of the roses exposed, I could cut out the grapevine, as well as a stray honeysuckle that had grown into the neighbor’s fence.

The point God clearly made in my heart stung as much as the thorns.

If I don’t tend the roses, the weeds take over – both my yard and my neighbors.

Negativity has overtaken my heart and mouth lately. Of course, it has. I haven’t tended my soul. And when I don’t tend my soul, it doesn’t just affect me – it affects those around me.

Quietly, I walked back into the house to write this blog. I stopped at the bathroom to wash my hands. Only then did I realize the shirt I pulled on this morning. 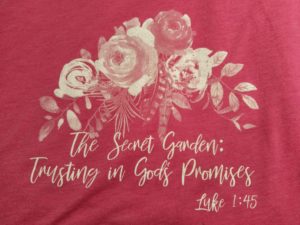 I come to the garden alone while the dew is still on the roses.
And the voice I hear, falling on my ear, the Son of God discloses.
And He walks with me and He talks with me

And He tells me I am His own.
And the joy we share as we tarry there, none other has ever known.

Nothing and no one can bring joy like our heavenly Father. Time with Him changes everything.

Excuse me while I go tend my heart’s roses.

Oh so true of all of us not to tend to our heart roses! TY Lora for the reminder!

This is beautiful – thanks for sharing! It touched the core of my heart.

This is so true! Thanks for sharing, Lora.

Thank you for sharing from your heart. We all need to tend to the roses and grapevine in our lives.

ThAnk you for sharing this. Good word..

I can hear my mom singing that precious hymn. Thanks for jogging that beautiful memory, Lora!

Thank you for sharing! That was very beautiful! You have an Awesome walk & talk with the Lord! It reminded me of my rose bush didn’t have any blooms, because there were dead ends that I needed to prune. It looked so brown! Then I pruned the brown dead off & later it was loaded with all kinds of beautiful fresh blooms! What a sermon God had given me even in my own life! I love u, Cindy