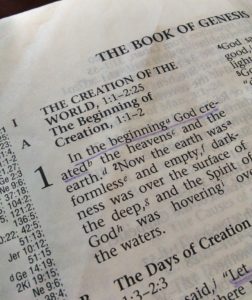 “Father, we are grateful for your Word, and the lessons you share with us through the stories of the past. Today, please open our hearts to hear the Holy Spirit apply today’s reading in Genesis to our own individual lives. In Jesus’ name I pray, amen.”

Pause and read Genesis, chapters 8 and 9.

Have you ever considered how long Noah and his family were waiting on the ark?  It took only forty days for the world to be covered with water, but it took many months for the water to recede.  The timeline is given in reference to Noah.  “In the six hundredth year of Noah’s life, on the seventeenth day of the second month” the rain began (7:11).  Five MONTHS later (8:3), the water line had only dropped down far enough for the bottom of the ark to touch land.  It took three MORE months (8:5) for the mountaintops to be visible!

After another grueling forty days, Noah sent out a raven to see what would happen.  Apparently there was enough food for the raven to eat because he did not return.  (Ravens are scavengers, willing to eat decomposing materials.)  So Noah sent out a dove to further test the water’s depth.  When the dove returned to him, he knew there was no vegetation for the dove to eat.  He waited another week before trying again.  This time the dove came back with a leaf in its beak.  Can you imagine the celebrating that night in the ark?!?  Again, Noah waited another week.  This time when he released the dove, she did not return.  I can only imagine the anticipation of standing again on solid ground!

How hard is it to wait when it seems the time has come?  God had closed the door, and certainly He would open it again…  If I had been Noah, I would have been bugging Him every day to let me out, or at least to tell me the plan!  Won’t you give me a clue God, what will happen next and when it will occur??

On Noah’s 601st birthday (8:13), he removed the covering from the ark and saw the ground again for the first time in 10 months.  But still he waited!! “By the twenty-seventh day of the second month the earth was completely dry.  Then God said to Noah, ‘Come out of the ark…’” (8:14-16).   Finally!!  Noah and his family and all of the animals had been in the ark for a little over a year!

Noah isn’t distracted by impatience.  Instead, his focus is on thankfulness.  As soon as Noah got off the boat, he took some animals and made an offering to God.  His grateful heart pleased the Lord so much that He promised to never flood the earth again, even though “every inclination of man’s heart is evil from childhood” (8:21).  Knowing full well that people would once again turn away from Him, God determined to keep His promise.   He sealed the promise with a rainbow.

Imagine what it must have been like to walk off of the ark into this new world.  The oceans were bigger, the landscape forever changed from the gullies left by the water.  The atmosphere probably felt different without the layer of water above the earth, and its absence would have made the sun more intense.  In addition to all of this change, the animals were suddenly afraid of them!  Then, incredibly, God gave permission to use the animals for food (9:2-3)!  Life would forever be shorter for all, man and beast.  The world was forever different, but a brilliant rainbow appeared in the sky, reminding them God’s faithful promises never change.

God repeated the command He gave Adam in Genesis 1:28.  “Be fruitful and increase in number and fill the earth” (9:1).  Would they obey this time?

Adam’s world was completely different then Noah’s. Adam and Eve never knew of sin until eating the forbidden fruit. Everything changed once human discovered sin. In Noah’s world, humans showed God that they simply could not stop sinning. Therefore, God tested Noah with living in solitude on an ark and trusting in him to eventually bring him to a new home. I think a huge difference though was the life span once Noah made it to the new world. Adam and Eve could live hundreds of years where as the life span grew shorter after the events of the Ark. Another difference is in Adam’s world, not only did he not experience sin before doing so, but this made him very pure. Noah was already unpure even if he got the chance for survival. I do not believe our world is very different from Noah’s. Like Noah, we too can trust in God and while doing so have distractions of life to stray us from our true path. We have the choice to either continue straying and be washed away with our sin or to get in the ark, so to speak and rise above our waves that crash in trusting God will lead us to a new shore, heaven.

I honestly feel as though as each day comes I’m getting better at not beating on the Ark but listening to God’s commands and trusting in him in my life patiently waiting. Not always but I am improving.

I wonder how long it was before Adam and Eve sinned? We’ll have to ask them someday. Did they get years of walking with God, or a month, or was it the first day?